Welcome to the Sanitary Engineering Department

Choose an Area below to view detailed information:

Click the map below for a larger view.  Each highlighted area will be listed below the map with details on the location. 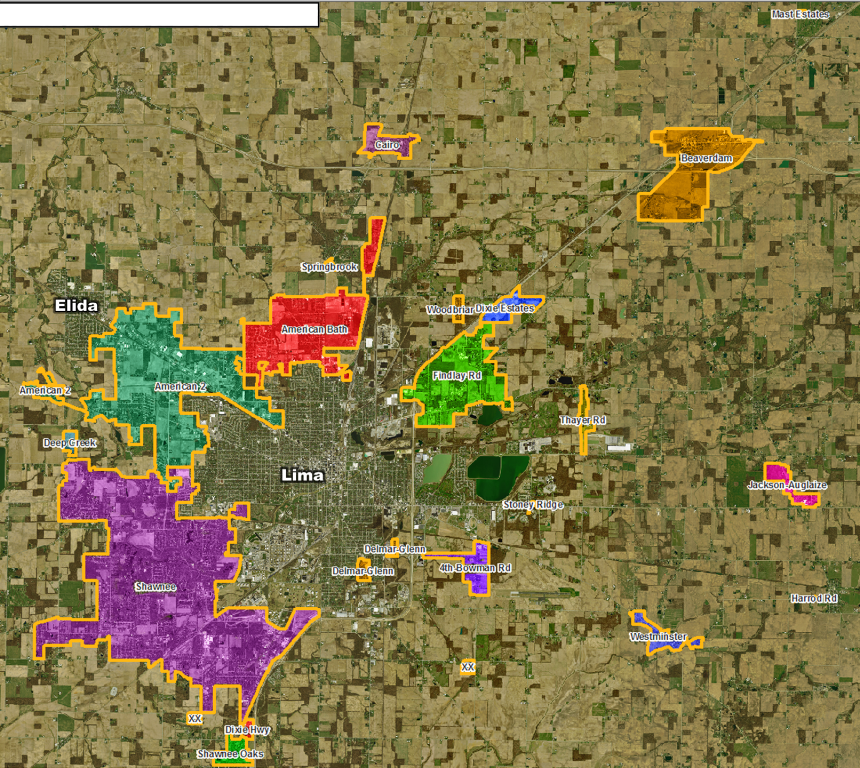 This project was initiated by many property owner complaints to the Perry Township Trustees about the unpleasant odors and sewage being discharged to an unnamed ditch located within the project area. The Allen County Sanitary Engineers in conjunction with the Allen County Health Department conducted a field sampling investigation of the project area. Field samples were tested and determined to have high levels of fecal coliform and biological oxygen demand (BOD). An informational meeting will be scheduled to inform all property owners of the unsanitary conditions, and what can be done to alleviate the problem.

The American-Bath Wastewater Sewer Subdistrict originated from the need to gain control of the septic system discharges and the rapid growth of the American and Bath Townships in the late 1960’s. The original plant came online in 1968 and was designed to treat .4 MGD (Million Gallons Day). Due to continued growth the old plant underwent expansion in 1988 to increase its capabilities to .6 MGD.

With the ensuing contract with the Village of Cairo to treat their wastewater, and the increase in customer base, the decision was made to build a new facility and abondon the old plant. Therefore in 1996 the current US Filter based Orbial Oxidation Ditch Plant came online with the Design capability of 1.5 MGD.

In 1974, the American II Wastewater Treatment Plant was put on line. The plant was designed as a conventional activated sludge plant.

The plant is designed for. 8 Million Gallons per day and consists of bar screens and parallel grit chambers followed by comminutors. Four lift pumps carry the sewage to parallel primary settling tanks. The primary tanks removed settled and floating solids that are stored in the sludge storage tank. The sewage flowed into the aeration tanks where air is introduced and mixed. In 1991, walls were constructed to divide the aeration tanks into two tanks; contact and stabilization. This modification of the tanks increased the treatment capabilities of the system.

The sewage then passes into the final settling tanks where solids settle and are returned to the stabilization tank, or pumped to the sludge holding tank. The final tank effluent then passes through two parallel microstrainers where it is filtered to 10 microns. The filtered effluent is chlorinated to kill bacteria and dechlorinated before discharged to Dug Run. The sludge is pumped from the sludge holding tank to an anaerobic digester where it is digested prior to applying it to farmland.

The Allen County Sanitary Engineering Department took on the costs to undertake this project in 2011. An agreement was made between the Village of Harrod and Allen County to collect and treat areas within the Auglaize Township Sewer subdistrict #1.

This project is owned and maintained by the Allen County Sanitary Engineering Department and flows are connected to the County’s system for collection and treatment. The Shawnee #2 Wastewater Treatment Plant treats the sewage in this subdistrict.

This is an assessment project that was initiated by many property owner complaints to the Perry Township Trustees about the unpleasant odors in the air.  Perry Township then contacted our office about an initial sewer design that would help eliminate the problem.  The project boundaries for this project consist of Clyde Avenue, Kingston Avenue, Charledon Avenue and sections of both 8th and 9th Streets.  Procedures for this project are scheduled to start in the beginning of 2002 with a preliminary estimated cost of construction at $1,039,140.00.  State grant funds, a local government match and user debt service will provide funding for this project.

In February of 2009 a contract was generated between the Village of Ft. Shawnee and Allen County for the treatment of wastewater from the newly constructed sanitary sewer within Allen Township. This agreement states that the County is responsible for the ownership, construction, operation and maintenance of the sanitary sewer.

In September of 1997 a contract was generated between the City of Lima and Allen County for the treatment of wastewater from the newly constructed sanitary sewer within Bath Township. This agreement states that the County is responsible for the ownership, construction, operation and maintenance of the proposed sanitary sewer.

The Allen County Sanitary Engineering Department took on the costs to undertake this project in 2004. An agreement was made between the Village of Lafayette and Allen County to collect and areas within the Allen East School district.

In August of 1966 a contract was generated between the Village of Cridersville and Allen County for the treatment of wastewater from the newly constructed sanitary sewer within Shawnee Township. This agreement states that the County is responsible for the ownership, construction, operation and maintenance of the sanitary sewer.

In August of 2013 the Board of the Allen County Public Health Department unanimously approved a resolution recommending a public sanitary sewer improvement be constructed by the Board of County Commissioners to resolve the sewage nuisance and eliminate the health hazard caused by failing household septic systems.

VTF Excavation LLC was awarded the project on the 16th of April, 2018. Construction of the sewer line began in May of 2018 and was completed in April of 2019.

This is a project within the project boundaries of the Village of Beaverdam, which includes a Water Tower, a Waterline Extension and two Lagoons to accommodate the development in the area.  Fanning and Howey Associates, Inc., in Celina, Ohio, is providing professional design services for all three developments.

Speedway Super America LLC took on the cost to construct a sanitary sewer collection system within Richland township in 2006. An agreement was passed to allow the Village of Beaverdam to treat and bill customers within the service area. The Village then remits a conveyance fee to the County on a quarterly basis.

A study was conducted by Kohli & Kaliher in September 2007 to determine whether the Woodbriar plant should get upgraded or abandoned. The treatment plant was ultimately abandoned and flow was redirected by force main to the Findlay Road sewer system.